Within Bangalore, the operation of above notification was amended vide Bangalore Sewage [Amendment] Regulation, 2018, which qualified the retrospective effect of the FEE Notification as per the following schema 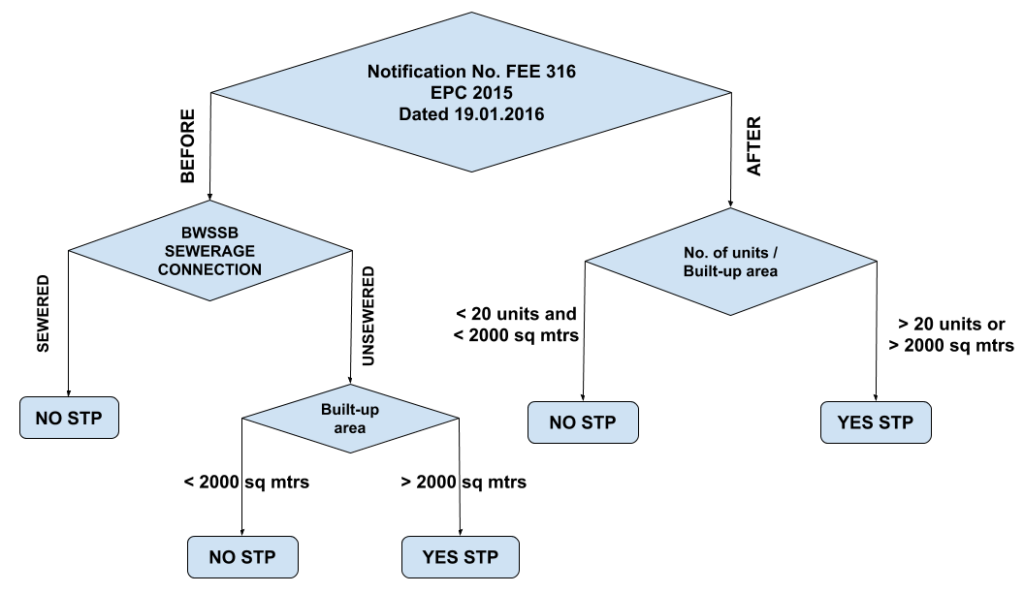 Under the Water (Prevention and Control of Pollution) Act 1974[2] and the rules[3] made thereunder, any project requires three types of permission from Karnataka State Pollution Control Board (KSPCB):-

As per the above notification, KSPCB would include building of an STP as a requirement before granting CFE/CFO for any activity/project. For each project/activity there is a file maintained in the regional/zonal KSPCB office where details of application for CFE/CFO, inspections and permissions granted are maintained. The CFE is mandatory for seeking approval of the project from BDA/BBMP/BMRDA/City Corporations; for obtaining water connection from BWSSB/Karnataka Urban Water Supply and Sewerage Board; and for obtaining permanent electricity connection from BESCOM/CESCOM/GESCOM/HESCOM.

These standards are applicable for the sewage treated for the STPs established by local bodies, industries, commercial establishments, apartments, residential layout, townships, CETPs treating only sewage.

5. Implications
These regulations are intended to contain and reduce water pollution and no thought has been given to the issue of manual scavenging. As long as the STPs are installed and meet the discharge standards specified in Section (2) above, any technology can be used and no regulation regarding how these STPs are to be cleaned are specified. In fact, most technology in use require annual cleaning of STPs and with STPs being made compulsory for apartments above 20 units, several STPs will spring up across Bangalore while the ability of KSPCB to inspect them is negligible. Thus, the phenomenon of manual cleaning of STPs will only increase in the coming future.